So, I believe it’s well overdue for a woman to chime in on the recent NBA trades that has every media outlet buzzing.

Lebron James decided to return to his home town. Some would say this decision was out of no where and the Cleveland Cavaliers didn’t even know they were a prospective candidate to be receiving the two time NBA championship winner. But I personally liked the classic way he delivered the message to the world. A well typed essay explaining childhood dreams manifesting into working goals and determinations. Ultimately making him the most sought after player of the league. I can understand him wanting to get his message out there uninterrupted without the camera in his face. So, I’m sure all of Akron, OH is saying, “Welcome Home Lebron.”

As some of us received delighted news and others received disappointing news that Carmelo Anthony was staying with the New York Knicks, I was personally hoping that he’d go to the Chicago Bulls because that’s my team but besides that he would have possibly gotten a ring out of it all. The Bulls have a team of critical players on the roster and they were only missing one thing, a crucial small forward. Some would say that Anthony’s wife played a major role in this decision of his to stay in NY, which I believe to be partially true. Every real man will listen to his wife’s opinion and reason with her and then ultimately make his own. So why is Lala getting so much heat. I don’t know but the true question is did he pass up a potential championship ring for Lala or the money? 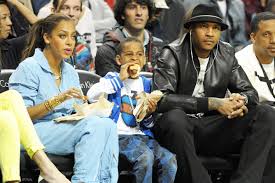 Either way, all seems to be very well with Pau Gasol

going over to the Chicago Bulls for a multiyear deal. He decided to leave the Los Angelas Lakers after 6 plus years with the team. After apparently speaking with Derrick Rose

and turning down the San Antonio Spurs and Oklahoma City Thunder, he decided it came down to his own instinct to choose to sign with the Bulls. And I have a feeling that the pulse of the 6 time championship winning city will reign again this upcoming season. Let’s go Chicago.

As always, If its not here….its not hot. This is what’s hot in hip hop.